The current regulatory concerns aroundÂ BitcoinÂ must be paid close attention to, especially for the individuals in the countries that have unclear regulations.

Recently, the Financial Conduct Authority [FCA] banned the sale of derivatives and exchange-traded notes (ETNs) that reference certain types of crypto assets to retail consumers. This news was worrisome for many as it followed the news of the U.S. Commodity Futures Trading Commission [CFTC] charged prominent crypto derivatives exchange, BitMEX with facilitating unregistered trading among other violations.

With the current events causing waves of panic among businesses in the space, many believe it was also a blow to UKâ€™s investor freedom. Even though the need for regulations for cryptocurrencies is being discussed globally, the stance of banning part of the services offered by crypto exchanges like the ETNs has hurt investors and exchanges alike.

â€œThrough banning the trading of crypto derivatives, we can expect UK trading space to move elsewhere. The demand for these securities continues to rise, with crypto derivative volumes reaching new highs this summer. Itâ€™s a lost opportunity for the UK.â€

The reason these countries were moving to regulate the crypto market was to protect the market, however, by levying a ban regulators may have disregarded the growing demand among retail customers to participate in crypto.

But not everyone is opposing this decision. Danny Scott the CEO and co-founder of CoinCorner exchange noted that even though the FCA banned crypto derivatives it was not going to impact exchanges but other companies like Revolut and eToro as they offer CFD rather than the asset.

â€œâ€¦companies offering CFDs may offer leverage on a trade, meaning you can buy Â£1,000 worth of a Bitcoin CFD, but with 5x leverage youâ€™re trading with the equivalent of Â£5,000. So, although the gains can be larger, the losses can be equally larger, making it a much higher risk.â€

He also added that the FCA had also introduced the option for Bitcoin and cryptocurrency companies to register with them making it a first step towards forming a regulatory framework around such assets. This clarified that the regulators were not against cryptocurrencies or Bitcoin but just with some services that the traditional traders could understand, however, by banning such services it did not help protect customers but in turn steered them away from using legitimate avenues.

â€œâ€¦we believe that the FCAâ€™s so-called â€˜consumer protectionâ€™ measures should be focus on weeding out existing scam companies and prioritising consumer education, rather than crippling investment opportunities and withdrawing from an area of growing importance in the financial markets.â€

While the moto of the crypto space has been â€˜Do your own researchâ€™,  such events highlight the importance to be an informed participant in the field. eToroâ€™s head of compliance and operations, Edward Drake stated that their operations in the country will be less affected even with new legislation, but added:

â€œâ€¦this does highlight is people need to be aware of the risks associated with investing, do their homework on what theyâ€™re investing in and be confident they are investing on a secure and regulated platform. These rules apply across all asset classes from crypto to stocks.â€

While the decision regarding the derivatives ban has already been taken, the Bitcoin market has bounced back from the news. Given the 2020 record of blowing up the gains created in the market every quarter, Bitcoin and other cryptos have learned to recover quickly.

Bitcoin has formed its latest support at $10k, and even as it consolidates, the network health appeared in a good shape. It hash rate once again hit an all-time high at 170 exahash. 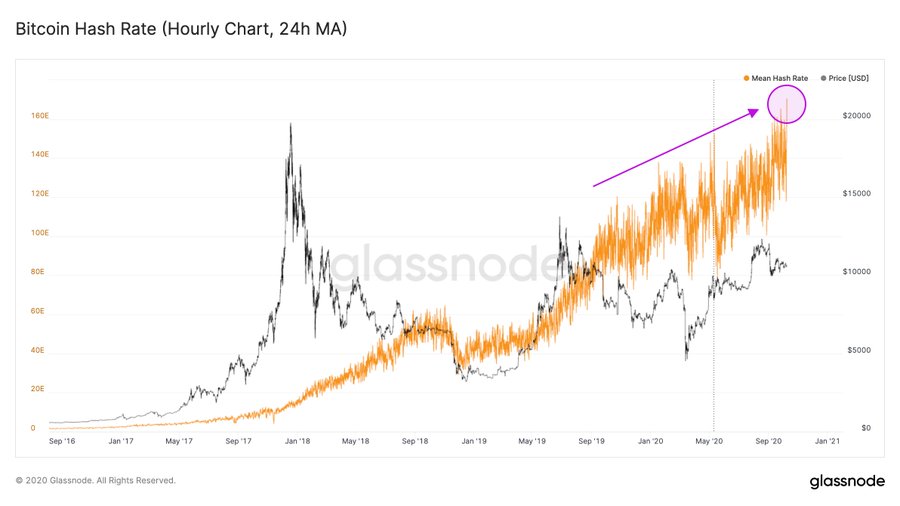 With the faltering hash rate during halving, this was a 40% spike since May suggesting the BTC market was secure as ever.